Skip to content
Home > Blog > Was Making Tax Digital ever really dead in the water?

Following the removal of Making Tax Digital from the Finance Bill back in June, we’ve been hearing mutters of ‘MTD? It’s dead in the water!’

But, after last month’s announcement from HMRC, we’re asking if that’s really the case? Or just wishful thinking from nervous tax agents and their clients?

Preparations for Making Tax Digital were in full swing at the beginning of the year. Since the announcement of MTD in 2015, it’s been a real talking point amongst accountants, bookkeepers and tax advisers.

In 2016, the majority of the people I heard speak about MTD expressed concern at what they deemed an unrealistic timescale. HMRC provided us with little clarity on turnover thresholds for eligibility. This left us unsure as to which of our clients would need to comply with Making Tax Digital.

The House of Commons Treasury Committee called the plans for Making Tax Digital over ambitious. They warned that small businesses may not be able to adjust at a reasonable cost in the suggested timeframe.

There had been quite a palpable sense of worry amongst us bookkeepers that under the original timescale, with some having to comply as early as April 2018, even HMRC wouldn’t be ready for MTD. We have to admit that there was a sense of relief when HMRC scrapped the MTD clauses from the Finance Bill prior to the snap election in June 2017.

However, as Public Bills can’t be carried over from one Parliament to the next (they must either be passed or scrapped), the Making Tax Digital clauses were only removed to ensure the Finance Bill moved forward to the next Parliament.

Fast forward to July 2017, through hastily re-written talks at industry conferences and countless hysterical ‘Making Tax Digital Scrapped’ headlines, and we’re treated to the next nugget of information from HMRC on MTD…

When it comes down to it, very little has changed from HMRC’s original vision of MTD. In introducing Making Tax Digital they were looking for four key things:

Digital tax accounts already exist and are in use. You can set up your individual tax account by visitingwww.gov.uk/personal-tax-account. There’s currently no change to agent access either.

Making Tax Digital then and now

Prior to the July announcement, MTD looked like this:

So, what exactly has changed? Here are the key points:

Making Tax Digital is still very much on the table

Whilst it may have hit a few road bumps, it looks like Making Tax Digital is still in progress. But we should look at these changes positively. We now have a clearer idea of what to expect. We’re going to have more time to acclimatise our clients to the new regulations. We can explain MTD in clearer terms to our clients.

We use several different cloud accounting packages with our clients. Luckily enough, very few are on spreadsheets or (god forbid) still using a ledger book. Here’s hoping we’ll have a smooth transition into the digital age of tax reporting.

Or is that wishful thinking…?

Getting The Most From Your Virtual Assistant

So, you’ve taken the step and hired a Virtual Assistant, but are you really feeling the benefit? Here are some useful tips on how to work successfully with a virtual assistant and maximise your business potential. 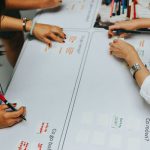 The Importance of delegation

So, you’re swamped at work. Your to do list is piling up, and you’ve not left your desk in goodness knows how long. Surely there must be an answer to managing this workload more effectively. Of course there is DELEGATION!