LinkedIn Top User Profiles: Am I A Cynic? 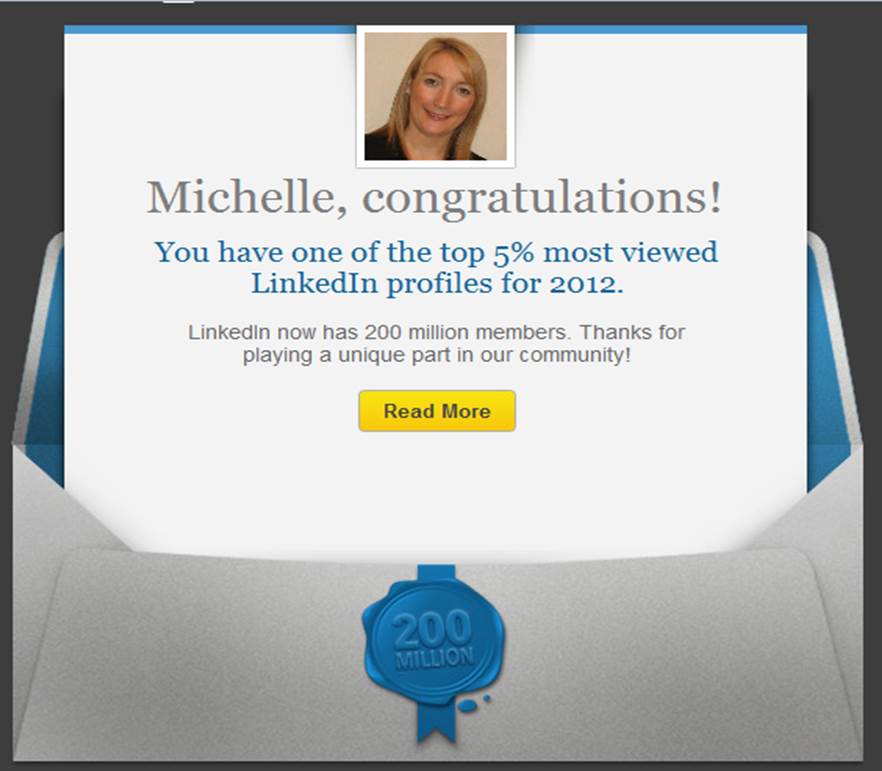 Were you one of the chosen few?

Last week LinkedIn sent a massive email campaign to users with the top 1%, 5% or 10% of profile views.  I received my email declaring my recognition in the top 5%. Were you amongst the lucky ones to receive one?
The thing is, I regularly review my LinkedIn profile to see who has been viewing it so I think I have quite a good grasp of the popularity of my account and this is why I’m cynical about the emails. If I’m in the top 5% then there must be a lot of inactive accounts out there.
So let’s get some perspective. As of December 31, 2012, LinkedIn operates the world’s largest professional network on the Internet with more than 200 million members in over 200 countries and territories (source: http://press.linkedin.com/about). But we all know it’s not just about the quantity but the quality of members. How many people have created accounts yet do nothing with them? So think about being in the top 10% now, does it still have the same glory?
It’s often difficult for people to pat themselves on back but if someone else is doing it for them then it’s somehow seems more acceptable. LinkedIn were very clever – they encouraged recipients to share the email, in fact they made it easy for people to do so by giving them a template. Twitter and Facebook were soon full of people boasting about their popularity. Great PR for LinkedIn, don’t you think?
What this also highlights is the power of data interpretation.  Being in the top 1% of users sounds more unique than being in the top 2,000,000 doesn’t it?  This is what makes it a very astute marketing campaign.
So, did you get one of these exclusive emails and if you didn’t make the cut did you wonder “Why not”? Have you looked at those who did get the email and consider “What are they doing that I’m not”? If you did, then this just goes to show how clever the marketing department at LinkedIn really are.  Traffic to LinkedIn must have soared and I’m sure they also gained many new users from the hype.
Well done LinkedIn and congratulations on reaching 2 million members.