Avoiding and Coping with Writers Block 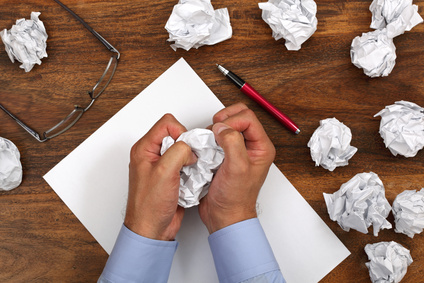 Sitting down and looking at the blank page, the curser blinking at you, you don’t have a clue what you’re going to write. An hour ago your head might have been full of ideas for the next innovative post but when it comes to writing you just don’t know how to get it onto paper. This scenario is more common than you’d think, writer’s block is something that many suffer from and as awful as it is there are ways of getting around it.

Stuck for Something To Say?

Usually it starts with something small, you try to work on a post and it doesn’t come out the way you want it, or you get the urge to just delete everything you write no matter what it’s about. Sometimes it will come in the form of not being able to make anything make sense, your sentences will be clumsy or even nonsense. In a sense, anything that stops you writing without there being a reason for you to stop writing can be called writer’s block. A lot of writers and bloggers don’t even know that they’re getting block at first, it feels like an off day or they chalk it up to a bad idea. If it goes on for weeks, even months then it’s definitely a block and that’s when it becomes a solvable problem, once you admit that you’re blocked of course.

Avoiding the block is obviously the best option; it’s so much easier to get started if you aren’t at a total standstill. One of the best ways to avoid the ubiquitous writing wall is to carry a notebook. It might sound daft but writing down little ideas that pops into your head during the day really helps. When you see something interesting, write it down you can blog about it later. It doesn’t matter what you blog about, from food to travel, if you keep a note of every idea you always have ideas on hand. When you think of something witty or insightful write that down too! Then, when you sit down to create a post you just have to have a flick, see what takes your fancy and you’re ready to get writing without even a thought towards writers block. Try it out for a few weeks, it really works.

Help…How Do I Get Out Of The Rut?

Coping with fully blown writer’s block is a little harder but it is manageable – the first step is to stop getting frustrated. We’ve all been there, we all feel your pain, but getting annoyed at yourself for being such a writing failure is not going to help you at all.
Stop, take a deep breath and start writing. It doesn’t even matter what you write about, what is important is that you get a flow going. If you can’t think of anything just write ‘I am writing’ over and over until something starts coming up. Even if you end up with ‘I am writing a load of rubbish that’s never going to make a blog post…’ it gets you past that stage of not being able to write and often once your fingers are on the keys something tends to fall out of them. If that doesn’t work try writing down what you would write if you could write the perfect post. Once you have gotten started and outlined exactly what you would do if you could write the best post you have ever written, you will realise that you’re a good way along the road to writing that post. Writer’s block is gone and you’re free to feel good about your posting talents again.

Get Into The Groove

So you’re moving through the block and you’re writing again, but none of it makes any sense. That’s okay. Don’t delete the post. Even if it’s the worst thing you’ve ever written at least you’re writing. Save it somewhere and sleep on it. The next day you can go back and write a little more. Read what you’ve written out loud, re-write it. If it starts to make sense then you’re on to something good, and you’re moving through the block. If it doesn’t make sense still that’s alright. Save it, sleep on it, try again tomorrow.
Things aren’t always going to solve themselves quickly, but keeping at it and writing even when you feel like nothing is ever going to work again is the best way to get through it all. You might even get something that you love out of it.

Really, the best way to avoid and overcome writer’s block is to write a lot. Every day if you can manage it, and to not worry about some things coming out gobbledegook. To start with your posts aren’t going to be perfect but you can fix that, and once the block is gone and your fingers are flying, all you’re left with is possibilities.