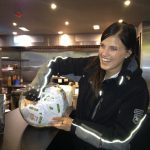 Life of an Apprentice at VABS

Todays blog is another guest blog, this time written by a German employee who was in the UK on a work exchange programme. Vanessa joined VABS for 3 weeks to gain experience of how we work in the UK and to improve her business English. It was an absolute pleasure hosting such an eager person and it wasn’t all one way…I learned a few things from her too.

What is face-to-face networking and how should I do it?

The old adage says, “it’s not what you know but who you know”.  Networking has been going ever since the dawn of man. We are social creatures and networking and connecting with each other is part of what makes us human. In the business world, especially if you are self-employed, or own a small business, networking can be an invaluable tool for generating new business and gaining products and services that will help your venture boom. There are two main types of networking associated with business. There is face-to-face networking and social media networking.  This article focuses on face-to-face networking, as it can so often be overlooked but it is still a major player in business development.

ValueAdd on Twitter
Michelle on LinkedIn
ValueAdd Blog Are You A Bookkeeper Or A Dinosaur?
This site uses cookies: Find out more.